The Amiga was a family of personal computers released by Commodore in the 1980's and 1990's.

Amiberry is a fork of UAE4ARM with support for WHDLoad, which offers a better console-like experience.

Please refer to the official Amiberry wiki for a detailed step-by-step installation and config guide.

For the optimal Amiberry experience, it is recommended that pre-installed WHDLoad packages are used. Amiberry has been designed to have compatibility with the 'Retroplay' WHDLoad packs. For more information on WHDLoad packages, see here.

Place your WHDLoad packages in

More information on adding game data can be found here.

Full documentation on the Kickstart roms required by Amiberry can be found here.

Place your Kickstart roms in

Amiberry makes use the RetroArch configs created during Controller Configuration. Consequently, Hotkey+X will bring up the UI and Hotkey+Start can be used to exit Amiberry. For full documentation, please refer here.

It is possible to customise controls for individual games using the Amiberry UI. For full documentation, please refer here.

The lr-puae is libretro Amiga core based on WinUAE. There are 2 versions available:

Place your desired Kickstart ROMs in:

To use disk and WHDLoad games with this core you'll need the following Kickstart ROMs. Rename them to the given name and copy the file in the BIOS folder.

It is critical to use Kickstarts with the right MD5, otherwise the core might not start.

Add custom RetroArch controls to the retroarch.cfg file in

The virtual keyboard has these additional actions:

Long press for sticky keys. Stickying the third key will replace the second.

Some games use mouse instead of joystick. D-Pad can be switched between joystick and mouse control in several ways:

The PUAE core has a comprehesive set of configuration options which control the emulation experience. A comprehensive list can be found here.

You can force a specific model if a game needs one (AGA games for instance) either by the "Model" core option or by file path tags.

The whole path (filename and directory) will be searched for the following tags if the model is "Automatic":

Example: When launching "Alien Breed 2 AGA.hdf" or "AGA/Alien Breed 2.hdf" the model will be Amiga 1200.

Place your Amiga ROMs and configuration files in

Content that can be loaded by lr-puae has the following file extensions:

One thing that Amiga enthusiasts seem to point out repeatedly is that although you may be able to expand an .lha file on Windows, you often shouldn't; the Amiga operating system and Windows don't always agree on paths and special characters, with the result that you can corrupt the file when unzipping it.

You can pass a disk or hdd image (WHDLoad) as a rom.

When passing a disk image, a hdd image or a M3U file as parameter, the core will generate a temporary puae_libretro.uae configuration file in RetroArch saves directory (the amiga rom folder) and use it to automatically launch the game.

When you have a multi disk game, you can use an .m3u file to specify each disk of the game and change them from the RetroArch Disc Control interface.

An M3U file is a simple text file with one disk per line (see Wiki).

Simpsons, The - Bart vs. The Space Mutants.m3u

When a game asks for it, you can change the current disk in the RetroArch Disc Control menu:

For games that support multiple disk drives, append "(MD)" (as in "MultiDrive") to the M3U filename to insert each disk in different drives, up to a maximum of 4 disks.

For games that require a dedicated save disk, one may be generated automatically by entering the following line in an M3U file: #SAVEDISK:VolumeName. VolumeName is optional and may be omitted. For example, this will create a blank, unlabelled disk image at disk index 5:

By default, RetroArch will display the filename (without extension) of each M3U entry when selecting a disk via the Current Disc Index drop-down menu. Custom display labels may be set for each disk using the following syntax in the .m3u playlist file: DISK_FILE|DISK_LABEL.

Pre-installed WHDLoad LHA archives can be launched directly, there is no need for any kind of manual preparing and downloading.

IPF support is done through the CAPSIMG library. To enable it, you have to put the dynamic library called capsimg.so (Linux) in RetroArch system directory (/home/pi/RetroPie/BIOS).

Compatible CAPSIMG libraries for Windows, macOS and Linux can be found at http://www.softpres.org/download and https://fs-uae.net/download#plugins.

If you cannot find CAPSIMG library for your CPU architecture, you can always build capsimg.so from the source which is available at https://github.com/FrodeSolheim/capsimg.

The core has embedded internal floppy drive samples. External sound samples have to be copied from https://github.com/libretro/libretro-uae/tree/master/sources/uae_data into a directory named uae_data or uae in RetroArch system directory (/home/pi/RetroPie/BIOS).

The following core options control the output resolution of the core (defaults are bolded):

With these settings all the standard resolutions are available:

UAE4ALL2 is no longer developed and we recommend using UAE4ARM on the Raspberry Pi.

Place your Amiga disks images in

The emulator comes with a free AROS rom that will work for running many games and demos.

These are hardcoded currently. This initial mapping was chosen as it's somewhat similar to MAME, and should mostly work on any controllers that use that input mapping (such as the picade). Joypad/Joystick is currently untested.

Launch it from Emulation Station, and you get the GUI where you can configure disks/roms/memory and insert adf images into the virtual floppy disk drives. 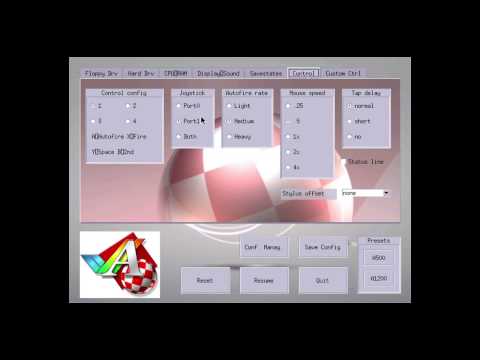 On EmulationStation, AMIGA, open "+Start UAE4Arm" and save a profile with random name then open the file and check the number in the parameter "config_version". Download the correct configuration file from previous link then rename it in "config.uae" and copy it, together with "AGCC.sh" (also download this from previous link), on Raspberry Pi. AGCC.sh uses the "config.uae" file in order to create games configuration and (if you want) you can edit it. For default behavior emulator is searching for kickstart 2.04 in

renamed in "kick20.rom", so you have to rename your kickstart or edit "config.uae".

and edit the tag

and edit the line in this way:

For game with multiple disks rename them in this way:

in other words change ONLY the floppy identifier.

Note: The old script from Mark Dunning has a problem with games with more than 9 floppies (creates others wrong config files) and creates a config file with name like "Game bla bla bla (Disk 1 of N).uae". This new app create only 1 file for a multiple disk game with the exact name of the game, "Game bla bla bla.uae"

Alternatively, a native BASH script to perform the same steps directly on the RetroPie machine can be found here: https://github.com/Douggernaut/RetroPieAssistant/tree/master/Amiga