Why do some emulators not show up?

The RetroPie SD image only ships with the most common emulators, if a system you want is missing you first need to make sure that emulator is installed. The details for installing additional emulators is explained on the first installation page

If the system still doesn't show up in Emulation Station, only emulators with ROMs inside its respective folder will show up in the EmulationStation GUI (given that the specific emulator is installed). For example, for the Nintendo 64 emulator to show up, you must have at least one ROM in the ~/RetroPie/roms/n64/ folder. For ROM types supported by each emulator, go to the wiki page for that specific system/emulator.

Why can't I SSH as root anymore?

For more details about the root account and its usage, see:

To reset all your rom file ownerships back to the "pi" user, enter the RetroPie-Setup Script

Where did the desktop go?

The PIXEL (formerly LXDE) desktop environment was removed from the RetroPie image to keep it smaller.

It can easily be installed from the RetroPie Setup Script 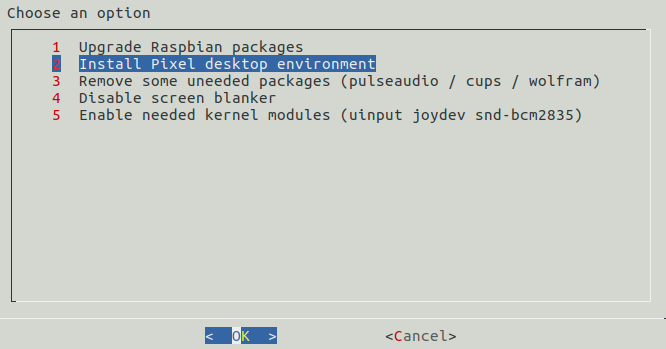 You can also install it manually with:

After installation your pi will boot into the desktop environment, you can change the behaviour to boot into emulationstation by selecting the autostart option for emulationstation from the configuration/tools section of the setup script, or you can set the autologin to console option from the boot options of the raspi-config menu.

Note that failing to run startx after the installation may prevent other XWindow-based applications from starting (e.g. Micropolis port), so do launch the desktop after installation to ensure that it is fully set up.

Note that you cannot run PIXEL and Retropie at the same time. You will need to log out of PIXEL completely to start EmulationStation

Why does shut down and reboot take ages?

Previous to RetroPie 3.4, there was an issue whereby EmulationStation was terminated on reboot/shut down, rather than shut down 'cleanly'. This has now been fixed, so every time you reboot/shut down EmulationStation rewrites all metadata about your roms, so that play counts, last-played dates, etc., are saved. This has the side-effect of the causing the whole process to take longer, relative to how many ROMs you have. MAME/FBA ROMs can often form the bulk of libraries, so it might be helpful to remove clones by rebuilding your set with a custom parent-only DAT.

An option has been added starting with RetroPie 3.7 to decide whether or not you want metadata saved on exit. 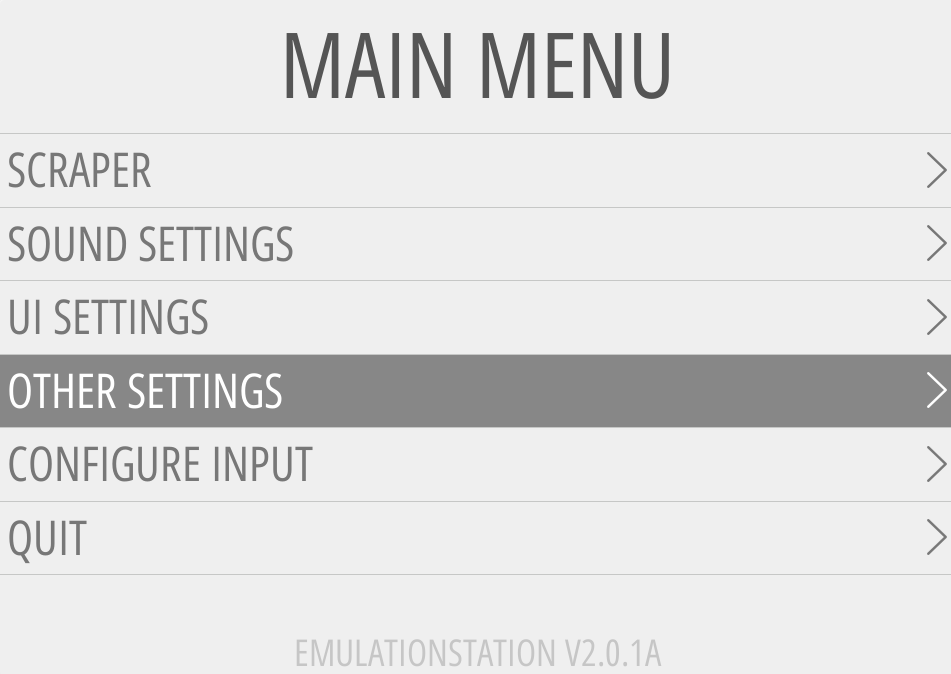 How do I hide the boot text?

NOTE that you should be comfortable with editing files in Linux as any wrong edits on the following file can break your boot sequence requiring a reimage of your SD card!

There are many parts that contribute to the boot text. The boot text is a valuable tool for debugging but if you know you aren't going to be debugging and just want a polished system this outlines some steps that can be taken to make a cleaner boot.

A quick summary of the options:

If using a plymouth bootsplash:

You can add the any of the options to the end of the cmdline.txt file make sure it is all on the same line or else it will break your boot sequence!!!

Hide/modify message of the day (superseded by .hushlogin if used):

How do I boot to the desktop or Kodi? 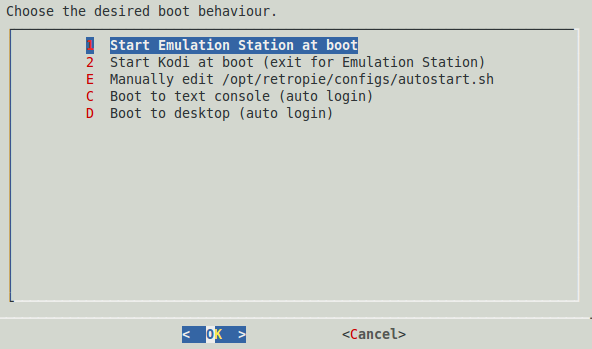 How do I remove the black borders?

How do I extend the available space when upgrading to a larger SD card?

How would I start from command line, say, the SNES emulator by itself?

First you need to make sure your emulators and systems are configured and working properly from EmulationStation.

To manually start a specific system and a game from the command line, use runcommand as shown below, replacing <SYSTEM> with the system you want (nes, snes, gba, arcade, ...) and <ROM> with the full path to the ROM to launch (example: $HOME/RetroPie/roms/snes/My Rom.smc). Do not forget to keep the surrounding quotes ".

To automatically start a specific system and a game directly instead of EmulationStation, you need to edit /opt/retropie/configs/all/autostart.sh and add the above line (again replacing the variables with your own values). Then, in the same file, remove any line containing #auto entirely to avoid EmulationStation or KODI to autostart again.

Is there another way to set up the gamepad for use, e.g., within the snes emulator?

The PSX emulator reports no BIOS found. What do I do?

More information about PSX BIOS files can be found on the PSX page.

How do I calculate the md5sum or CRC32 of a BIOS file?

An example to calculate the md5sum for the Game Boy Advance BIOS file gba_bios.bin

And this would be how to calculate the CRC32 for gba_bios.bin

If these commands are not found, then you will need to install md5sum and CRC32

Which memory split should I use?

Using the raspi-config or rpi-update script, one can change the RAM splitting for the Raspberry Pi. Depending on your hardware setup you might have to change your splitting.

A Raspberry Pi B/B+/2 is highly recommended. The GPU should have at least 256MB RAM. If you have a Raspberry Pi A/A+ it is not possible to scrape games and use system themes.

All retroarch emulators use the same method to save to disk. The default behavior is to only write to the save file upon a clean exit back to emulationstation. This is done by default when exiting the game (eg, via the Exit Hotkey combination). Hence, if a game happens to completely freeze or crash, it's likely that you will lose in-game progress even after saving via the in-game method.

Besides using save states, one optional method you can use to prevent this accidental loss in progress is the autosave_interval setting. This setting can be changed in /opt/retropie/configs/all/retroarch.cfg either with the terminal, Configure Retroarch / Launch RetroArch RGUI under settings->saving, or Edit RetroPie/RetroArch configurations under Manually edit Retroarch configurations. Once autosave_interval is set to equal a number of seconds, retroarch will automatically write to the save file every interval of that number of seconds.

Why Can't I Insert Coins in Arcade Emulators?

It's whatever is bound to RetroPad Select.

If there is not a button available to use as Select, rebind to an unused button.

How can I increase the console font size?

Recent versions of the RetroPie-Setup script include a Console Font script module at Configuration / tools -> consolefont.

Alternatively, you can execute the following command and follow the instructions on screen:

How can I recover my RetroPie after enabling the desktop OpenGL driver?

Note: this entry applies to the Raspbian Jessie based RetroPie installations.

The OpenGL driver for the Raspberry PI VideoCore GPU was introduced to provide hardware accelerated OpenGL for the X11 OpenGL applications, during the Raspbian Jessie version. From the original release:

[...] In this release we are shipping an experimental OpenGL driver for the desktop which uses the GPU to provide hardware acceleration

[...]. If you don’t use this option, the desktop does have OpenGL support, but it uses a very slow software renderer, which makes all but the most basic OpenGL applications pretty much unusable. The hardware-accelerated version is much faster, and makes some quite decent OpenGL games playable on the Pi.

RetroPie - and the underlying components - are not using the X11 server for display, enabling the OpenGL driver will not add any features or benefits for the system. It also disables with the VideoCore kernel driver used by RetroPie, having the unpleasant side effect of locking the interface and making any direct access to your RetroPie system impossible.

To recover from such a situation, there are 2 options:

How can I disable a USB device without disconnecting it?

USB devices can be disabled via deauthorization in udev. For example, the following udev rule will disable a Mayflash Wireless Wii U Adapter:

The values for idVendor and idProduct can be determined by the command lsusb in the Retropie console. Alternatively, the following command(s) will show them for a particular joystick device (jsX). To disable the device in question, substitute your idVendor and idProduct values in the above udev rule and save it to a file named /etc/udev/rules.d/60-disabled_devices.rules (the name between 60- and .rules is arbitrary). That should disable the USB device on the next reboot or after running the command sudo udevadm trigger.

To re-enable the device, just delete the file or change ATTR{authorized}="0" to 1.

Why Emulationstation doesn't start automatically after an update ?

Due to a bug in the systemd Raspbian package, certain OS upgrades will break the auto-login configuration for the pi user, stopping Emulationstation to start automatically. After the update, you're presented with a text mode screen and login prompt (retropie login:).

To fix this, login to the system with the pi user (default password is raspberry), then start the Raspbian configuration utility by running:

To fix the auto-login configuration, go to 3 Boot Options, choose Desktop/CLI and finally choose the Console Autologin option. Go back to the main menu and choose Finish and Reboot your Pi.

After the reboot, Emulationstation should start automatically.

My Xbox controller is not working properly with Moonlight Embedded/PPSSPP

Some applications like Moonlight Embedded or emulators like PPSSPP expect the Xbox 360/One controllers to have the analog triggers (LT/RT) exposed as axis instead of buttons.

RetroPie's xpad Xbox controller driver is configured to map the controller's LT/RT as buttons - insteads of axis - and this option makes the controller not working properly in applications that use SDL gamepad mappings.

To solve the problem, one of the following solutions can be used:

After the modifications above, the controller needs to be re-configured again in EmulationStation.