This guide is a manual process to recreate the stock SD image RetroPie released on the RetroPie Website for the Raspberry Pi. If you aren't comfortable with the terminal you would be wise to just use the RetroPie SD image provided.

If you are trying to follow this guide because you want the PIXEL desktop environment, you can already install it on the stock RetroPie SD image by following the guide here

RetroPie can also be installed on most debian based distros, a guide for installing RetroPie on Ubuntu on a PC can be found here

You can download a fresh Raspberry Pi OS image from here. The image can be installed the same way as the RetroPie image as described here).

You can check your free disk space with

/dev/root is your main partition. Then, I would recommend to update and upgrade the existing APT packages with

Most of the install scripts will attempt to install a variety of packages and libraries that each emulator requires. These installations will fail if your system locale settings are invalid. You can easily verify this by executing locale command. A valid locale will return values set for all options, such as in the example below.

If any of the above configuration lines are unset (particularly LANG, LANGUAGE, and LC_ALL), you should set them before installing RetroPie. The easiest way to set each item is to use the update-locale command, such as sudo update-locale LC_ALL="en_US.UTF-8".

Users can also set the locale through the raspi-config tool.

A reboot is required before these changes will be reflected by the locale command.

NOTE: The below configurations are not needed when installing on a Raspberry Pi4 model.

Running EmulationStation requires a larger than default GPU memory split. Make sure you reserve enough memory for EmulationStation by modifying the /boot/config.txt configuration file or by using raspi-config as described in the Memory Split page.

A reboot is required after any modifications to the video memory allocation.

Install the needed packages for the RetroPie setup script:

The script is executed with 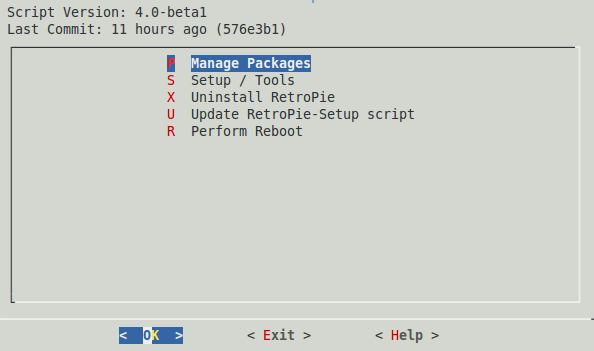 This will install the core and main packages which are equivalent to what is provided with the RetroPie SD image.

Now, you have to copy your rom files into the ROMs directory. If you followed the steps above the main directory for all ROMs is ~/RetroPie/roms (or /home/pi/RetroPie/roms, which is the same here). In this directory there is a subdirectory for every emulated system, e.g., nes, snes, megadrive. Attention has to be taken for the extensions of the ROM files. All the information needed for each system is detailed in this wiki (see wiki home page or sidebar for systems)

EmulationStation can be run from the terminal by typing emulationstation in the terminal.

Say you don't want to bloat your system with all of RetroPie - you also have the option to only install the emulators you want.

When you select Manage Packages, you will first want to start by installing the core packages.

The core components needed for RetroPie to function are:

Emulators can be installed and updated individually from the Main, Optional, and Experimental packages.

NOTE: If you intend to run ROMs from a USB drive or use an USB drive for transferring ROMs, don't forget to install and enable the usbromservice, located in the Optional packages section.

If you want to use Samba shares you can set them up from the setup/tools option of the RetroPie setup script.

Follow the steps in the FAQ.
If you're booting to the desktop you'll want to disable the retropie splashscreen from the setup script first.

On Debian Jessie add consoleblank=0 to the existing line in /boot/cmdline.txt (with a space before it so it's an additional parameter). This prevents the screenblanker kicking in. With it, runcommand dialog is always displayed.
There is also a gui option in RetroPie-Setup -> Configuration / Tools -> Raspbian Tools to disable the blanker, but it doesn't work in Jessie due to a Debian bug.