If you have a Raspberry Pi 3, wifi is built into the pi, if you have a pi2 or earlier you'll need a wifi dongle, you can check to see if your wifi dongle is compatible here. You may want to use a dongle with a pi3, in this case see here.

NOTE: In order to use the WiFi on the new Raspberry Pi 3 Model B+, you will need to first configure the WLAN Country via raspi-config. It’s under menu 5 Localisation options in raspi-config. You can start raspi-config from the RetroPie menu in EmulationStation or from the command line with sudo raspi-config.

There are 5 main methods to configure Wifi:

You can access this from the Retropie menu in emulationstation (you can also access it from option 3 in the RetroPie setup script):

It will open into this menu:

After it's done configuring you should see your wifi info in the original menu:

Connecting to Wifi Without a Keyboard

If you wish to connect to wifi without needing an extra keyboard you can add a file to the boot partition of the sd card called wifikeyfile.txt

You can then access the wifi module and select the option to "Import wifi credentials from /boot/wifikeyfile.txt"

Connecting to Wifi Without a Keyboard (Raspbian Stretch)

Starting with Raspbian Stretch, loading the wifikeyfile from the setup script is not necessary.

Create a file called wpa_supplicant.conf in the boot partition using the following template. (This will be moved at boot to the /etc/wpa_supplicant directory).

Make sure to include the RETROPIE CONFIG ... lines as shown to ensure that the RetroPie-Setup wifi configuration module will be able to cleanly edit/delete your configuration if you wish to change it later.

Wifi will not start up if you have an hard wired ethernet connection. After disconnecting the ethernet cable you'll need to reboot to get Wifi started.

If you want ssh to be enabled by default as well you can create a blank file called ssh in the boot partition too. This is a 'flag' file and will be deleted during boot after ssh is enabled.

you can also add wireless-power off at the end if you have issues with your wifi dongle turning off and on a lot and not being able to maintain a connection.

The following only applies to Raspbian Jessie

You can use the default /etc/network/interfaces

Then you'll need to edit /etc/dhcpcd.conf and add at the top modifying it for your own router and IP address:

If you want a static IP with ethernet then change it to:

on reboot (if configured correctly) your wifi will be working.

To scan for WiFi networks, use the command sudo iwlist wlan0 scan. This will list all available WiFi networks along with other useful information. Look out for:

First you'll need to ammend /etc/network/interfaces to point to wpa-supplicant if it isn't already:

We've changed it to wpa-roam so that it will reconnect if the connection drops.

Go to the bottom of the file and add the following:

The following are different ways of configuring your network depending on what encryption your router is configured to.

Now save the file by pressing ctrl+x then y, then finally press enter.

At this point,wpa-supplicant will normally notice a change has occurred within a few seconds, and it will try and connect to the network. If it does not, either manually restart the interface with sudo ifdown wlan0 and sudo ifup wlan0, or reboot your Raspberry Pi with sudo reboot.

You can verify if it has successfully connected using ifconfig wlan0. If the inet addr field has an address beside it, the Pi has connected to the network. If not, check your password and ESSID are correct.

Note that this may cause a small amount of background cpu usage, which can stop the CPU from scaling to lowest frequency.

you first need to install it with sudo apt install wicd wicd-curses and then type wicd-curses in the terminal to open it. 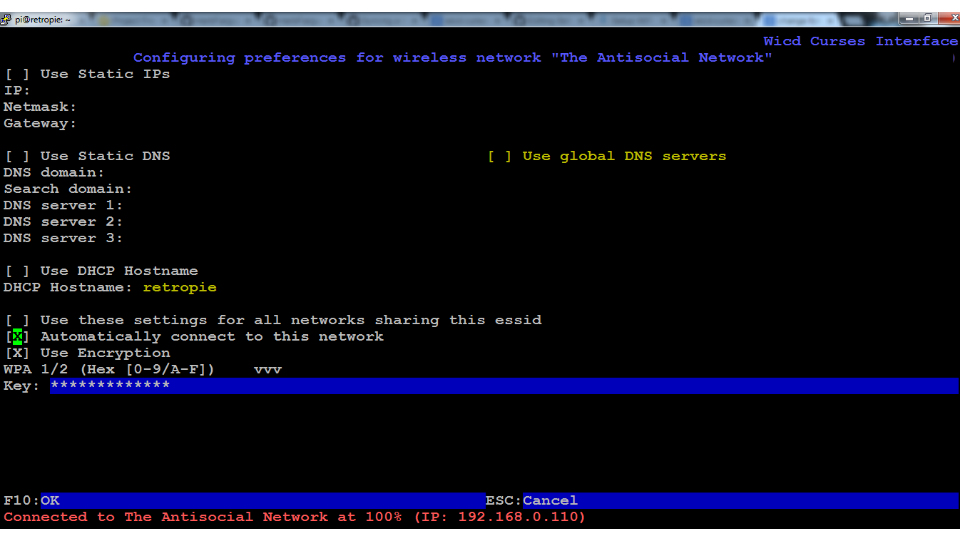 check automatically connect to this network (by pressing enter) and type in your wifi password where it says "key" press F10 to save and then press SHIFT+c to connect and press Q to exit back to the terminal.

There are some noted issues with the daemon using some CPU and preventing the Pi from scaling to lowest frequency, so if that's the case you can remove wicd-curses by typing sudo apt remove wicd-curses and proceed to setup your wifi using method 2 or 3.

You may want to use an external Wifi dongle: maybe your pi case is blocking or slowing the signal (with a metal case it's pretty common), for instance.

The easiest way is to first configure wifi with the internal controller, using one of the above methods.
Plug your dongle, reboot, and make sure it's connected using ifconfig : it should appear as wlan1, and have an IP address.
Then, disable the onboard wifi by editing /boot/config.txt and adding dtoverlay=pi3-disable-wifi.
That's it :)